Jim Handley took over from Ray Whiley in 2016 as the Champion for Little Doward. He soon expanded his territory to include Great Doward and King Arthur’s Cave. In the report below he describes cancelled plans, a window of opportunity to for two successful excursions, and an optimistic forward look to new challenges. Julie Schroder (Champions Co-ordinator)

I had planned to have three group visits to the Dowards in 2020. One would have been a repeat of leading a walk for the annual Ross Walking Festival. The theme of the Festival was to have been as part of wider celebrations commemorating the 250th anniversary of the Reverend William Gilpin’s efforts to attract people to take the Wye Valley tour. This was a trip by boat from Ross to Chepstow studying the artistic merits of the landscape through which they were passing. They would have passed through the Wye gorge below the Dowards. My intended walk would have highlighted the gorge from the Severn Sisters viewpoint above and from the river level below. Of course the whole festival went the same way as many other events. 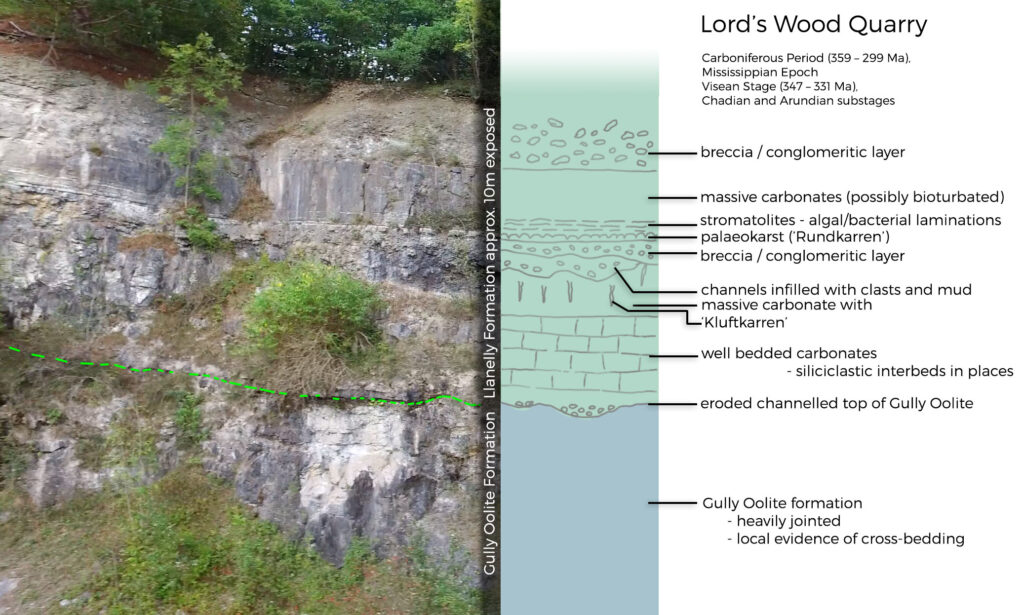 Having almost by accident found the superb case study of Lords Wood Quarry on Great Doward prepared by Nick Chidlaw and Michael Brooks for the EHT’s Deep Time Project, I had a group from Malvern U3A due to come and experience it and to complete their day by seeing the newly (2019) cleared limestone pavement on Little Doward. Again, it was not to be this time.
Finally though, there were one (or actually two) successes. In October our local U3A group in Monmouth agreed some outdoor activities could resume. Our geology group then jumped at the chance to escape to England, but with groups there limited to six we ended up making two visits to Lords Wood Quarry. So at last the Deep Time case study was dusted off and put to very good use. For us at least the efforts put into this were really appreciated. One of the Lords Wood images is from the study itself (see here for more information: https://deeptime.voyage/resources/lordswood/), and the other shows some of us within this impressive quarry. Each day was rounded off with a delightful picnic in beautiful sunny weather sitting on one of the Severn Sisters’ viewpoints, and by having a look at King Arthur’s and adjacent caves. 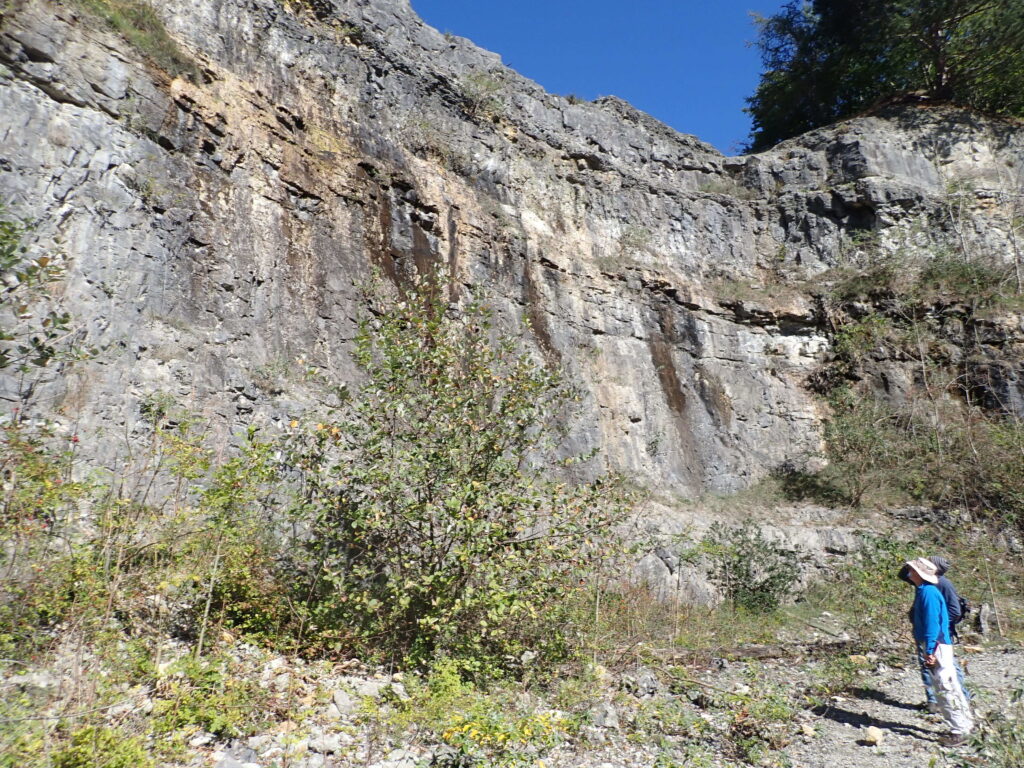 Even after several years I am still finding new things about the Dowards. Several times I have been able to show individuals some apparently natural, but in practice artificially created, features. These were made for the Victorian iron master and MP Richard Blakemore who in the mid 1800s had the carriage rides and walkways navied into the challenging hillsides of the Wye Gorge. Thanks to nature some things are not easy to access now but there are, for example, a tunnel, a giant stone seat, an impressive vertical [yes!] slab of limestone pavement, and a hermit’s cave. This gives new meaning to building stones! Finally, see the image of a 25 foot cleft in a dolomitic limestone cliff – just waiting for company to have a closer look with me! 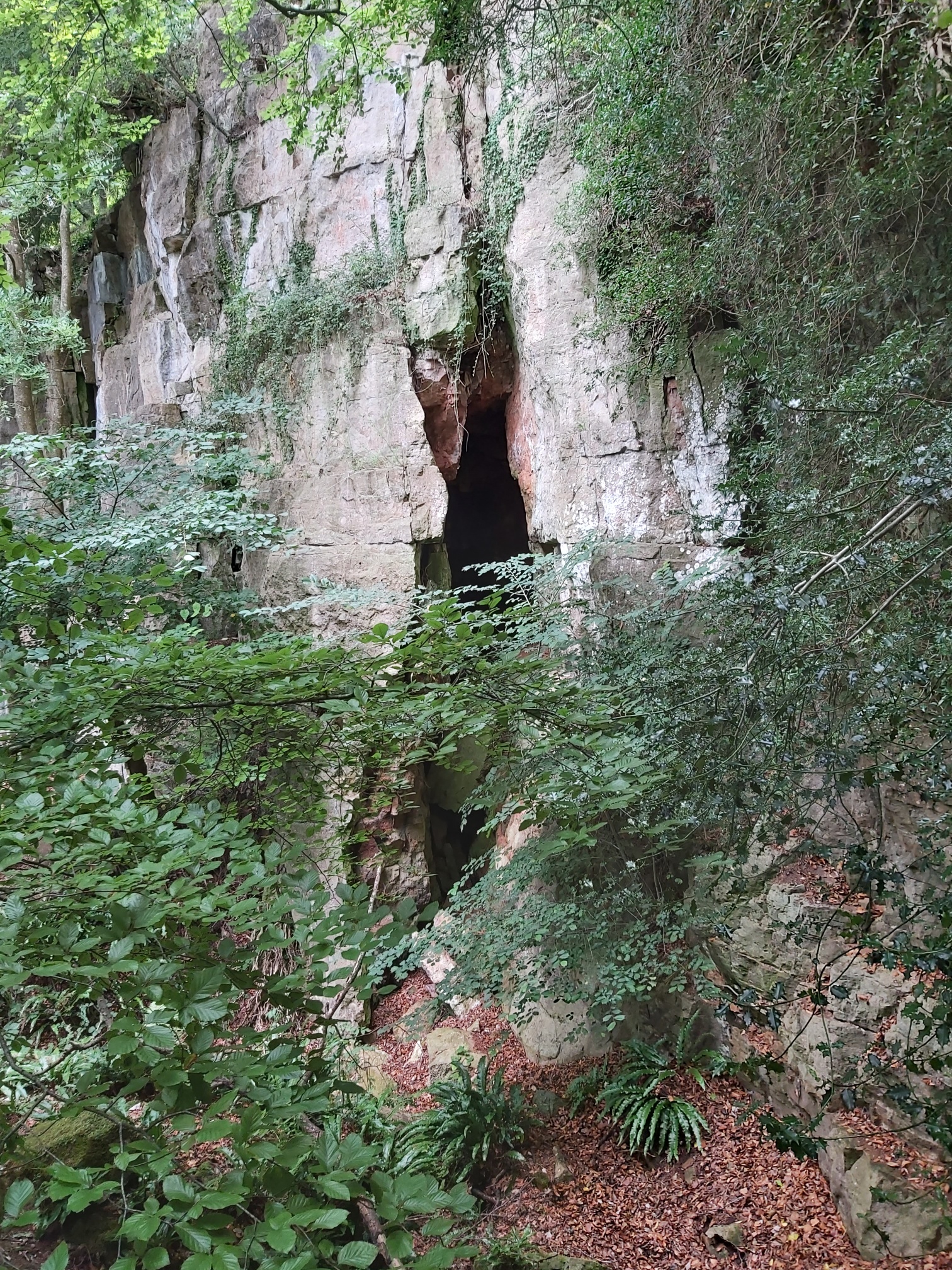 Perhaps in these challenging times being a hermit has its attractions. We look forward to renewing visits by groups later this year.