In the summer, Julie Schroder noticed a difference between two tiny exposures on the footpath on Rednal Hill.  She suspected that the two lithologies were the same as those exposed on Bilberry Hill to the south, and if correct there should be an unconformity between them.  In August, members of the Lickey Hills Geo-Champions set out to unearth the junction between the two. 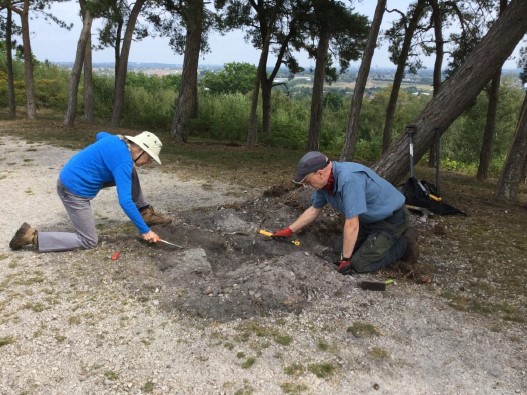 A small excavation was all that was required to reveal the unconformity. (Photo Ray Pratt) 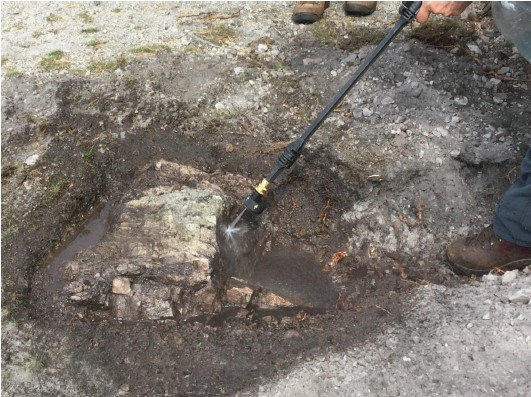 At first glance the two formations look similar because of their pale colour.  This is due to the upper formation containing a high proportion of fragments from the underlying Lickey Quartzite.  However, they can readily be distinguished from one another by their textural attributes.  The overlying rock contains angular fragments of Lickey Quartzite, rounded vein quartz pebbles and a sandy matrix, which includes a significant proportion of well-rounded, frosted aeolian grains.  In contrast, the underlying Lickey Quartzite is a well-sorted mature quartz-rich sandstone.  Like its counterpart on Bilberry Hill, the unconformity is very irregular. 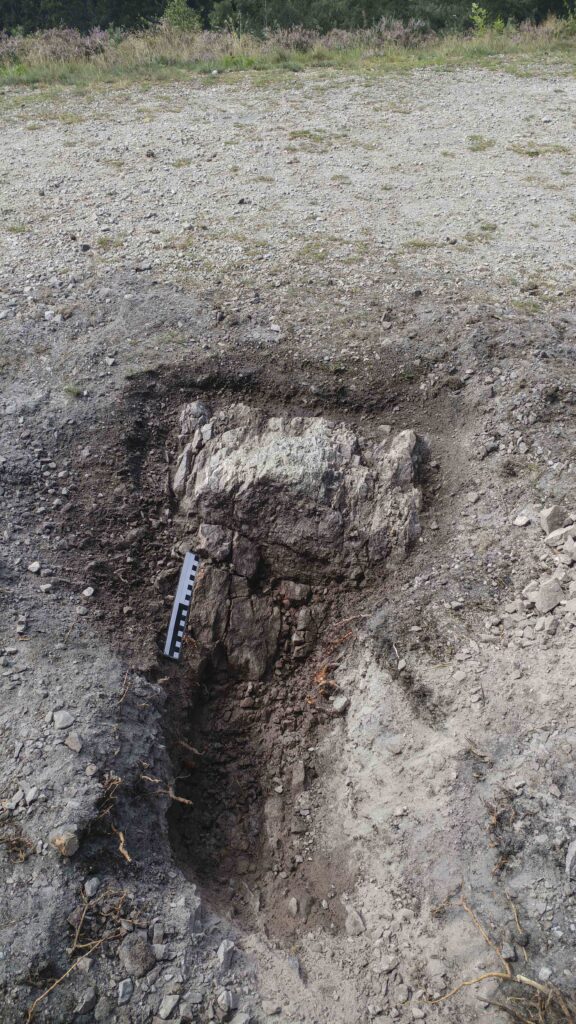 The yellow dotted line on the middle photograph identifies the location of the unconformity. Direction of view – west.(Photos Alan Richardson)

The unconformity at nearby Rubery, at the Junction between the A38 and Leach Green Lane, is overlain by the Silurian Rubery Sandstone.  There are some indications that the rock resting on the unconformity on Bilberry Hill and Rednal Hill may also be part of the Rubery Sandstone Formation (the sand matrix at all three sites contains a significant proportion of aeolian grains), but with the exception of the Rubery exposure, there are no fossils to provide a basis for correlation.

The hilltop outcrops lie at similar, but much higher elevations than the unconformity at Rubery.  If they can be correlated with one another, and if it can be shown that this disparity is not the result of structural displacement, it would suggest that in this area the Silurian marine transgression drowned an area of land with considerable relief.