Quarrying on the Lickey Hills

Extensive quarrying occurred on the Lickey Hills and northwards through to Rubery during the 19th and early 20th century. The two sites selected for the Champions project are Warren Lane Quarry, near to the Lickey Hills visitor centre, and Barnt Green Road Quarry, on the eastern flank of Bilberry Hill. Both quarries are cut into rocks dating from the Ordovician period of geological time, around 488 million years ago. The rocks in these quarries are known to geologists as the Lickey Quartzite Formation. They are hard and crystalline, and have been used for road aggregate as well as the building of nearby Frankley Reservoir. Warren Lane Quarry is a large quarry approximately 75m in length. The rock is exposed on the northern face of the quarry, and reaches approximately 10m in height. At the eastern end of the quarry there are large vehicle bays built into the quarry face, as well as some work sheds in the centre of the site; some of these structures date to World War I. Log piles are scattered around the site, with many located at the base of the rock face.

As Warren Lane Quarry is a working area, it can only be visited by arrangement. Please contact the group using the e-mail address below for further information.

Barnt Green Road Quarry is located next to the Barnt Green Road on the eastern edge of the Lickey Hills Country Park. It is a deceptively large quarry, with rock faces approximately 20m high and 80m long. By 2011, the quarry was heavily overgrown and
a bulldozer was needed to clear the rock faces Tracing out the overfold makes the structure clearer. The yellow lines that zig-zag vertically down the face were once laid down horizontally!

Within the quarry, there are some fascinating structural features to be seen, including faults and an impressive overfold. The eminent 19th Century geologist Charles Lapworth studied the quarry and it’s features. The Barnt Green Road quarry is best accessed from the Lickey Hills Visitor Centre (SO 998 753 or Google Map). Here you can learn more about the geology of the area from the display boards. There is also a car park, a small cafe and toilets.

You will find a useful Location Map here which shows the positions of the sites – it is taken from our geotrail booklet.

You can explore the geology of the Lickey Hills and Rednal by following the trail in the booklet, ‘Lickey Hills – Barnt Green Road Quarry’. This booklet contains an explanation of the geology of the area, and directions for the ‘Champions’ geology trail which can easily be completed within a couple of hours.

The booklet can also be downloaded here: Lickey Hills booklet 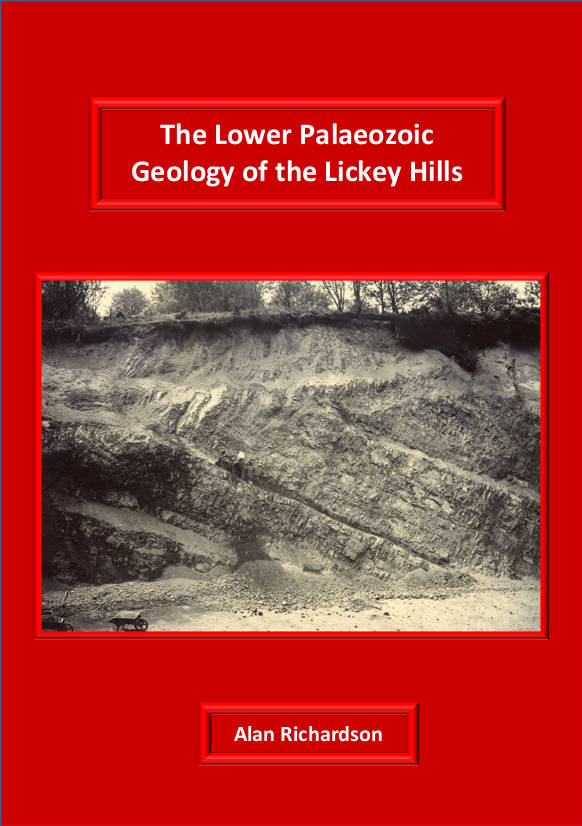 In May 2018 a new panel was produced and installed along the Champions trail on Bilberry Hill ridge (near the car park). It can be seen here: Rocks and Landforms Panel.

The booklet can also be downloaded here: The Lower Palaeozoic Geology of the Lickey Hills
Revised November 2019 to include an updated interpretation of Kendal End Quarry on page 7.

We are happy to provide talks for local school groups, history societies, geological field trips or any other interested parties.

The visits cover the fascinating history of the quarry, from the formation of the rocks and their subsequent distortion into the shapes we see today, through quarrying in the 19th Century, use of the quarries during WW2, and finally the work carried out as part of the Champions project.

A wide range of childrens’ activities are also available to school groups and families.

We hope that you’ve found this page useful. If you’d like to know more, to arrange a visit, or to get involved with the group, e-mail us on lickeychampions@gmail.com and we’ll get back to you as soon as we can. You can download our information leaflet here.

Where to learn more 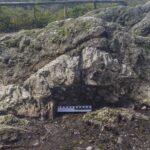 In recent years, work by the Lickey Hills Geo-Champions has revealed exposures of an unconformity on Bilberry Hill and Rednal Hill.  In both locations a strongly-cemented breccia, dominated by angular quartzite fragments, rests on the eroded surface of the Lickey … END_OF_DOCUMENT_TOKEN_TO_BE_REPLACED 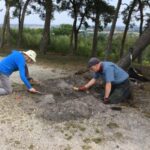 Rednal Hill Unconformity – SO 99705 75984 (+or- 7m in any direction) In the summer, Julie Schroder noticed a difference between two tiny exposures on the footpath on Rednal Hill.  She suspected that the two lithologies were the same as … END_OF_DOCUMENT_TOKEN_TO_BE_REPLACED

Today’s clearance session was aimed at ensuring that last year’s progress was not lost to the insidious encroachment of the geologist’s nemesis…plant life. Weeding, bramble-bashing and litter collection maintained the visibility of the exposure, and pressure washing of one section … END_OF_DOCUMENT_TOKEN_TO_BE_REPLACED

About 25m along the footpath leading south from Eachway Lane lies an outcrop of quartzite breccia, which closely resembles the breccia seen on Bilberry Hill. Two geoconservation sessions were devoted to revealing more of the rock and to pressure washing … END_OF_DOCUMENT_TOKEN_TO_BE_REPLACED 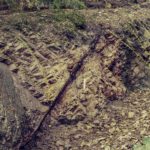 In a previous posting, I suggested that the curvature of the bedding adjacent to the fault at the west end of Kendal End Quarry represented drag folding. In a recent clearance session the Geo-Champions excavated a trench along the face … END_OF_DOCUMENT_TOKEN_TO_BE_REPLACED

When I was first shown the Lickey Quartzite at the summit of Bilberry Hill, it seemed incongruous.  Unlike the other exposures in this formation, much of the rock at this location was a poorly sorted monomict breccia of quartzite fragments … END_OF_DOCUMENT_TOKEN_TO_BE_REPLACED

The Lower Ordovician Lickey Quartzite is well-known for its lack of fossils.  It is interpreted as a near-shore sand flat facies: as such it would have suffered bioturbation, wave agitation and twice-daily scouring by tidal currents.  These processes, combined with … END_OF_DOCUMENT_TOKEN_TO_BE_REPLACED

Conservation work by the Lickey Geo-Champions continues to unearth evidence for the structural evolution of the Lickey Quartzite.  However, one particular pair of structures  has proven to be highly elusive.  In The Geology of the Lickey Hills, William Boulton, who … END_OF_DOCUMENT_TOKEN_TO_BE_REPLACED 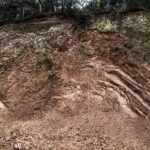 Ongoing geoconservation work in the quarries of the Lickey Hills continues to unearth evidence of the region’s enigmatic geological history. At the south east end of Barnt Green Road Quarry, the large-scale recumbent fold in the Lickey Quarzite is cut … END_OF_DOCUMENT_TOKEN_TO_BE_REPLACED

On Saturday 12th May, the H&W Earth Heritage Trust held its AGM in the Lickey Hills School Room, with a Champions-led walk scheduled for the afternoon. The Champions had spruced up Warren Lane and Barnt Green Road quarries in advance … END_OF_DOCUMENT_TOKEN_TO_BE_REPLACED