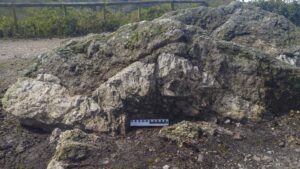 In recent years, work by the Lickey Hills Geo-Champions has revealed exposures of an unconformity on Bilberry Hill and Rednal Hill.  In both locations a strongly-cemented breccia, dominated by angular quartzite fragments, rests on the eroded surface of the Lickey Quartzite Formation (LQF).  On 11 April, a work party on Bilberry Hill explored the limits of the outcrop of this boundary, and sought to gain a better appreciation of its significance.

Adrian Wyatt’s work revealed a good example of the resistant breccia, sitting unconformably on closely-jointed Lickey Quartzite, which was more readily eroded.
Malcolm Coghill’s exposure turned out to be Lickey Quartzite.  It was heavily jointed, but the joints were firmly cemented.  The significance of this initially eluded me.
Hannah Whitten worked on the southern end of the main outcrop.  This revealed the very uneven unconformity well above the undercut which marks the junction with the blocky and easily-eroded quartzite below. 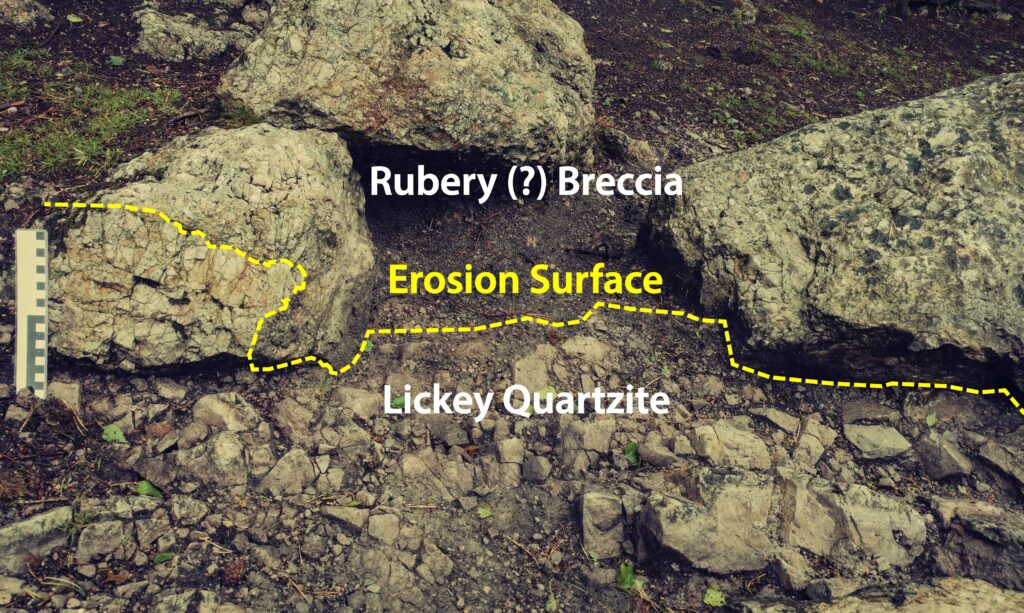 A cleft runs through the main outcrop: erosion has broken through the breccia layer to reach the more readily eroded heavily-jointed Lickey Quartzite.
In the outcrop photo below, I have darkened the breccia to illustrate the uneven nature of the unconformity.  The quartzite immediately beneath the unconformity is flush with the breccia, and therefore is just as resistant to erosion. I would explain this apparent anomaly as follows:
Following uplift of the deformed Lickey Quartzite Formation (LQF), erosion produced an uneven surface.  Angular fragments of quartzite, in places mixed with sand, accumulated in the hollows.  A strongly-seasonal climate led to the development of a silcrete.  The cementation process lithified the breccia, but silica was also precipitated along the joints in the LQF.  This self-limiting process produced a crust of more-or-less even thickness, ignoring the undulations of the unconformity.  Therefore, where we see the rock has been undercut by the erosion of the heavily-jointed LQF, it is not always coincident with the unconformity – it simply marks the base of the silcrete crust.  [This is similar to Hutton’s Unconformity on Arran, where a calcrete layer leads many an unwary geologist to misplace the location of the erosion surface.] 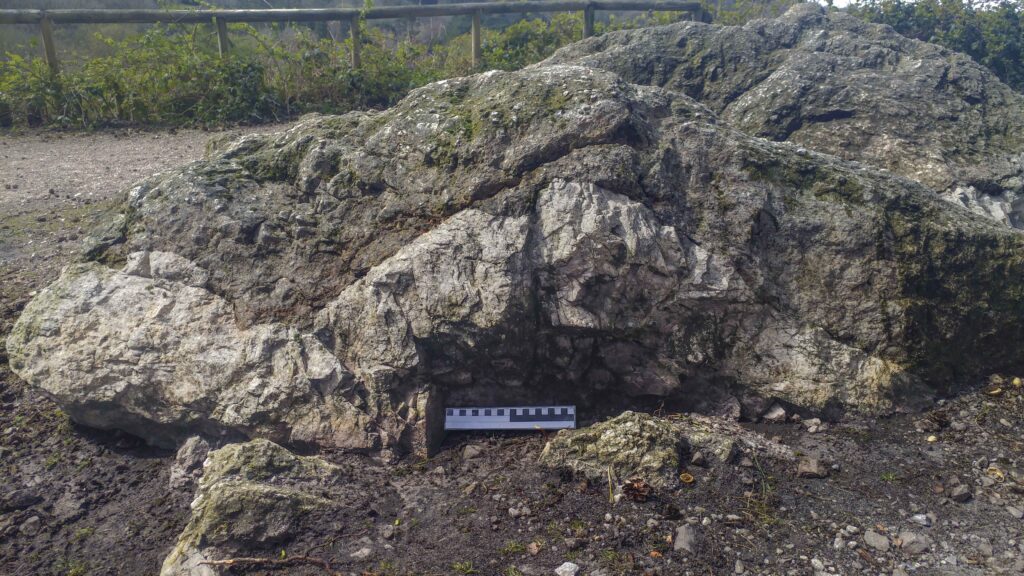 The east side of the main outcrop.  The breccia has been darkened to enhance the visibility of the unconformity.  On the left-hand side of the exposure, the pale Lickey Quartzite can be seen to be undercut at the base of the silcrete.
The photo of the polished section of a LQF specimen from Bilberry Hill shows the rock to be a very mature, well-sorted quartz arenite (quartzite).  The grains have developed an interlocking mosaic texture because of deep burial (>1km).  Feldspars can be seen in various states of breakdown, and cavities have been left where they have been completely removed.  Weathering of feldspars can release calcium ions into solution in the soil water.  Under the right conditions, these can react with hydrogen carbonate ions to precipitate calcite.  Given that we have a potential source of calcium ions in the quartzite, there is a possibility that we are dealing with a calcrete, rather than a silcrete.  In testing the breccia with HCl, I have not obtained a positive result for calcite, but it is likely to be present only in very small amounts: grinding a sample into fine fragments will increase the surface area over which a reaction can occur, and may produce a positive result.  However, I consider this an unlikely outcome.  The most common feldspars in sandstones are potassium-rich, and contain very little calcium.  Nevertheless we shouldn’t discount the possibility…yet. 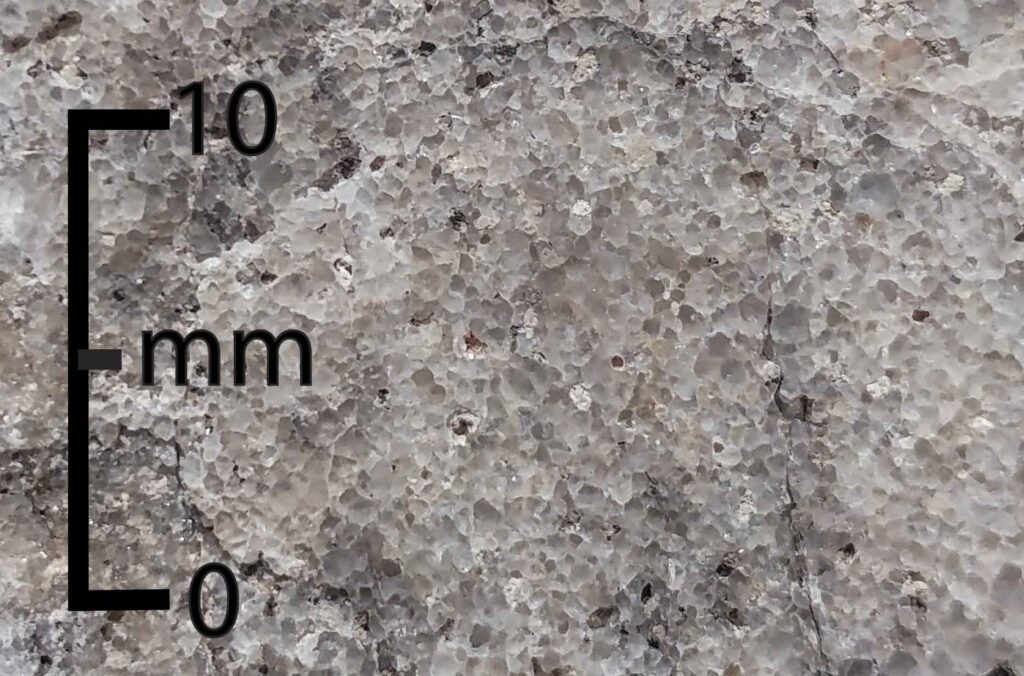 Polished surface of the Lickey Quartzite found at Bilberry Hill.