When I was first shown the Lickey Quartzite at the summit of Bilberry Hill, it seemed incongruous.  Unlike the other exposures in this formation, much of the rock at this location was a poorly sorted monomict breccia of quartzite fragments strongly bonded by a silica cement.  There was debate as to whether the rocks were truly outcrop or displaced boulders, and speculation about the origin of the breccia.  As it was assumed that this exposure must be close to the supposed hinge of the ‘Lickey Anticline’, it was suggested that the fragmentation could be associated with folding of the rock.  However, more intense folding is seen in the Barnt Green Road Quarry, without the development of this type of brecciation.  If the origin was structural, it was more likely to be fault-related.  The other possibility was a sedimentary origin.

When the group recently undertook a ‘research walk’ along the length of the Lickey Ridge, I was struck by the fact that the unconformity seen at the Rubery Cutting rises southwards towards Bilberry Hill.  It occurred to me that if the unconformable surface preserved a Silurian landscape with significant relief, the only source of sediment on the high points would be the Lickey Quartzite itself, and that the Bilberry Hill breccia might be sitting on the same unconformity as the Silurian Rubery Sandstone.

On the 26 May, a group of Lickey Hills Geo-Champions undertook a clearance of  the site.  Malcolm Coghill, David Green, Ken Lewis, Julie Schroder, Adrian Wyatt and I spent a fruitful three hours excavating, cleaning and discussing.  We noted many contacts between breccia and unbrecciated Lickey Quartzite, in a variety of orientations: in some places the contact was indistinct, but on both sides of the cleft that runs through the outcrop, the contact is very clear. 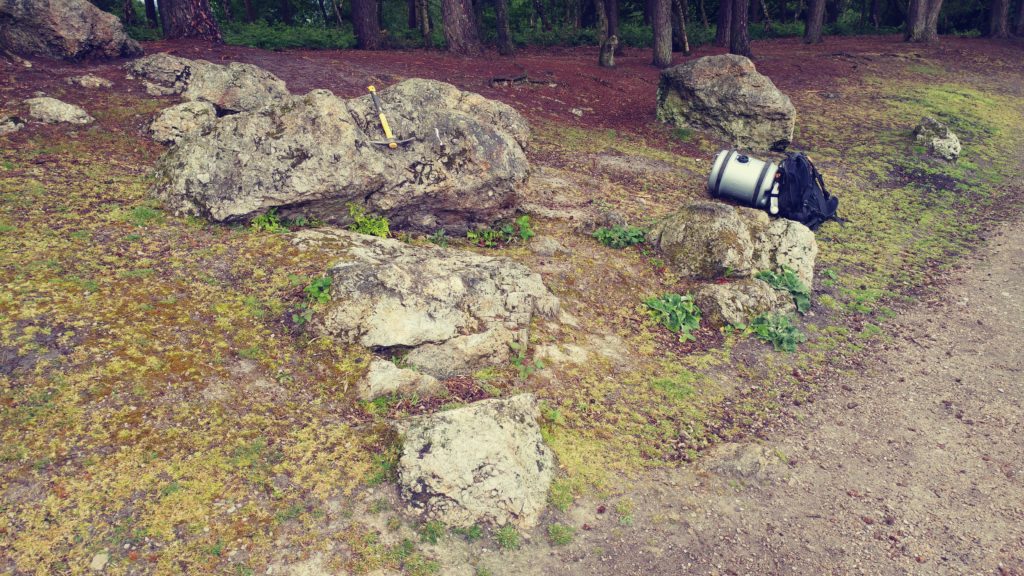 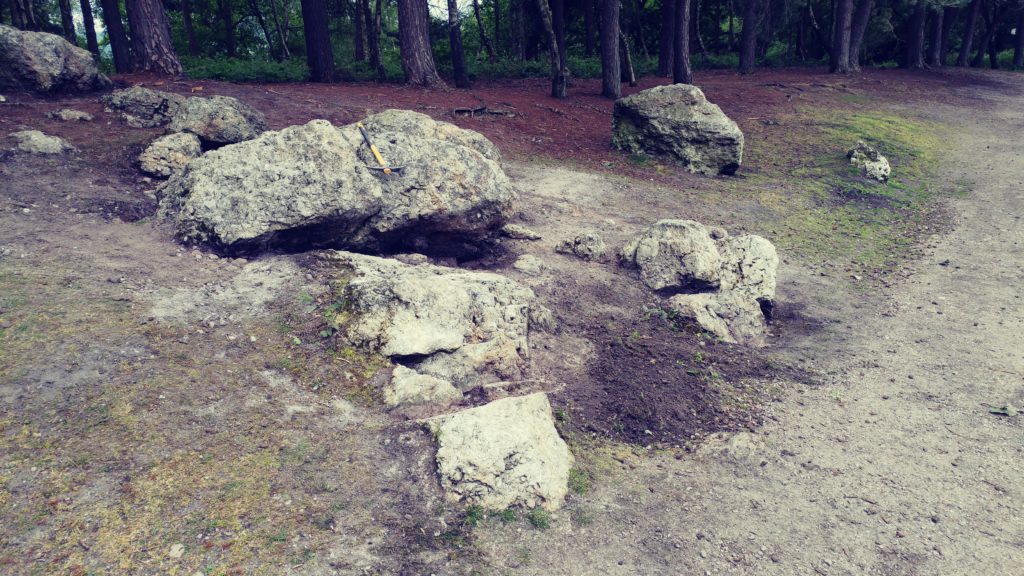 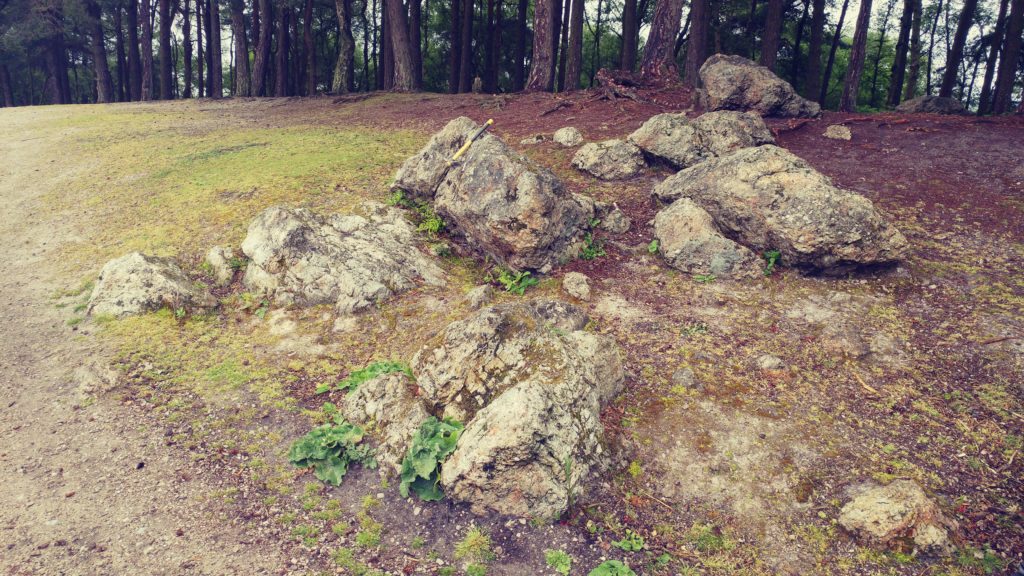 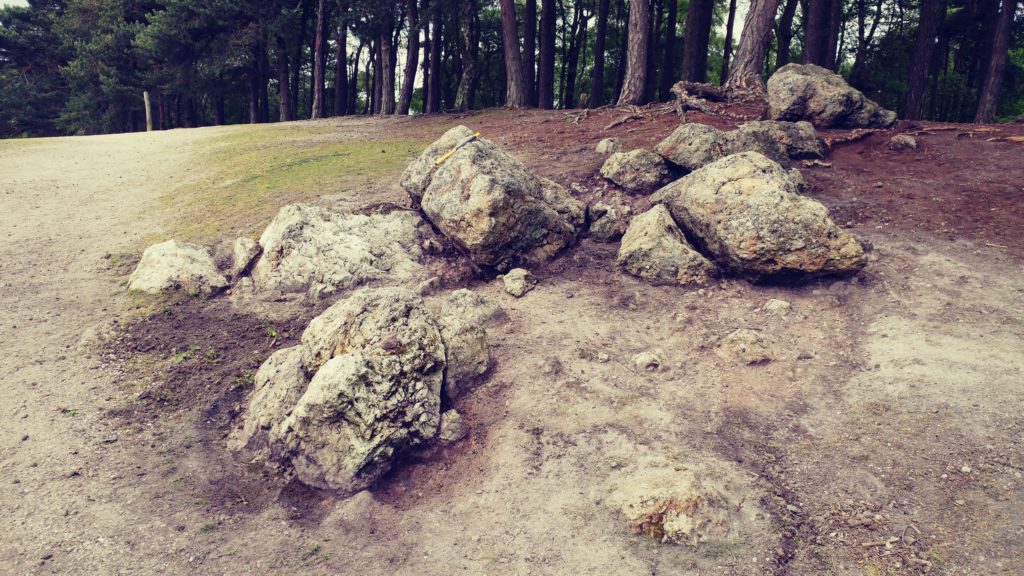 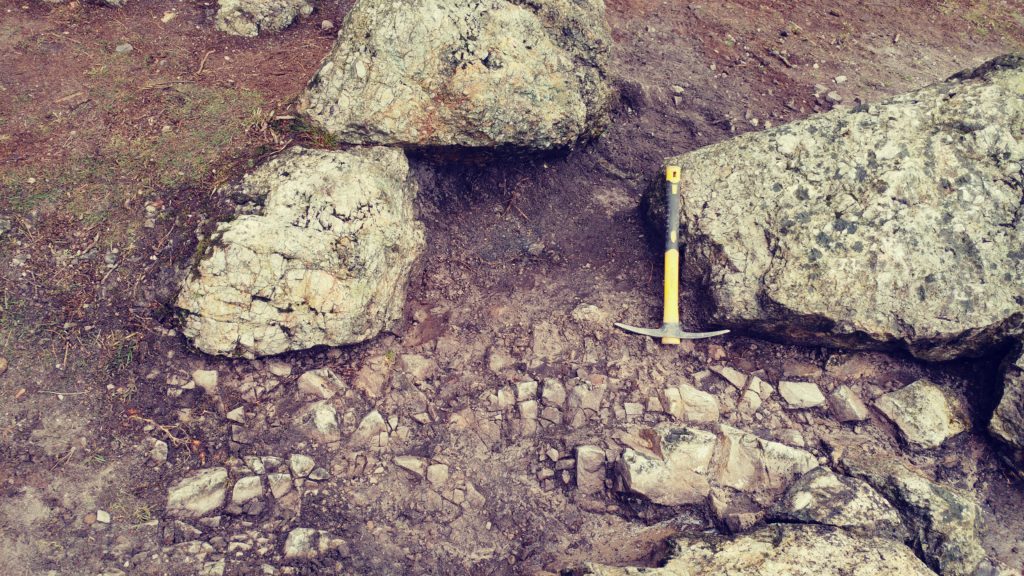 The Bilberry Hill Unconformity on the east side of the cleft that runs through the outcrop. Ordovician Lickey Quartzite is overlain by Silurian Bilberry Hill Breccia.  The head of the mattock marks the position of the contact. 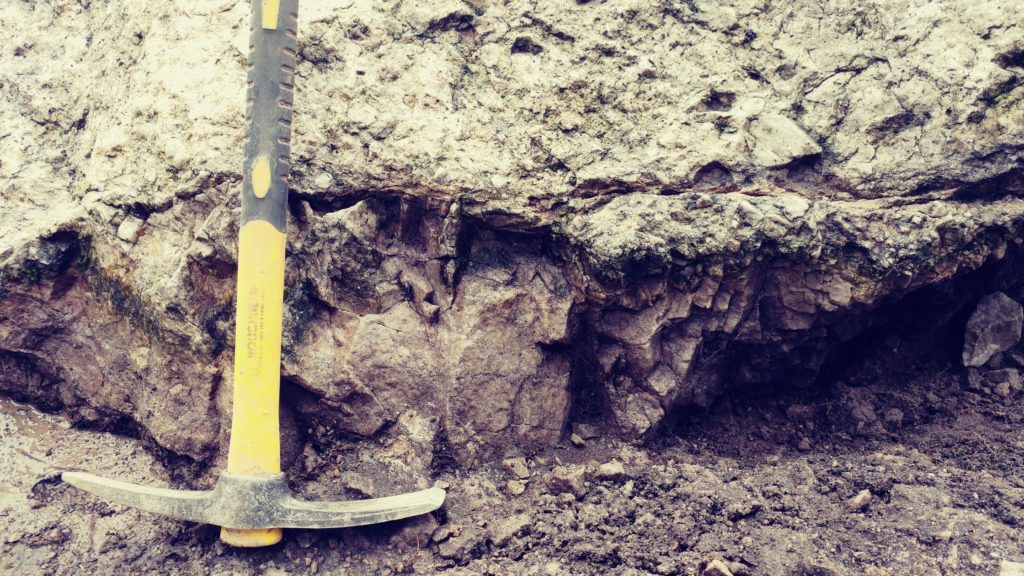 The Bilberry Hill Unconformity on the west side of the cleft.

We therefore conclude that the breccia is of Silurian age, more or less contemporaneous with the Rubery Sandstone, and reflects deposition of weathered fragments of Lickey Quartzite on a topographical high spot, initially beyond the reach of the encroaching Silurian sea.  This would suggest that the Lickey Ridge may have had an earlier existence in the Lower Palaeozoic.  The fact that the breccia lacks the extensive jointing that characterises the Lickey Quartzite may suggest that some folding of the quartzite took place during the Caledonian Orogeny, prior to the development of the unconformity; however, this contention is not supported by the concordant dips seen in the two formations at the Rubery Road Cutting, which suggest Variscan deformation.

Beneath the surrounding thin soil layer lies a white deposit of very fine sand and silt, which contains occasional well-rounded frosted grains, and embedded fragments of quartzite and breccia.  This unsorted detritus is clearly derived from the outcrop, and may be the consequence of weathering under periglacial conditions.

As a footnote, the clearance was greatly enhanced by the use of a portable pressure washer – the WORX Hydroshot.  A 40 litre Aquaroll was used to take water to the site, and two freshly recharged batteries proved more than adequate to exhaust the water supply. 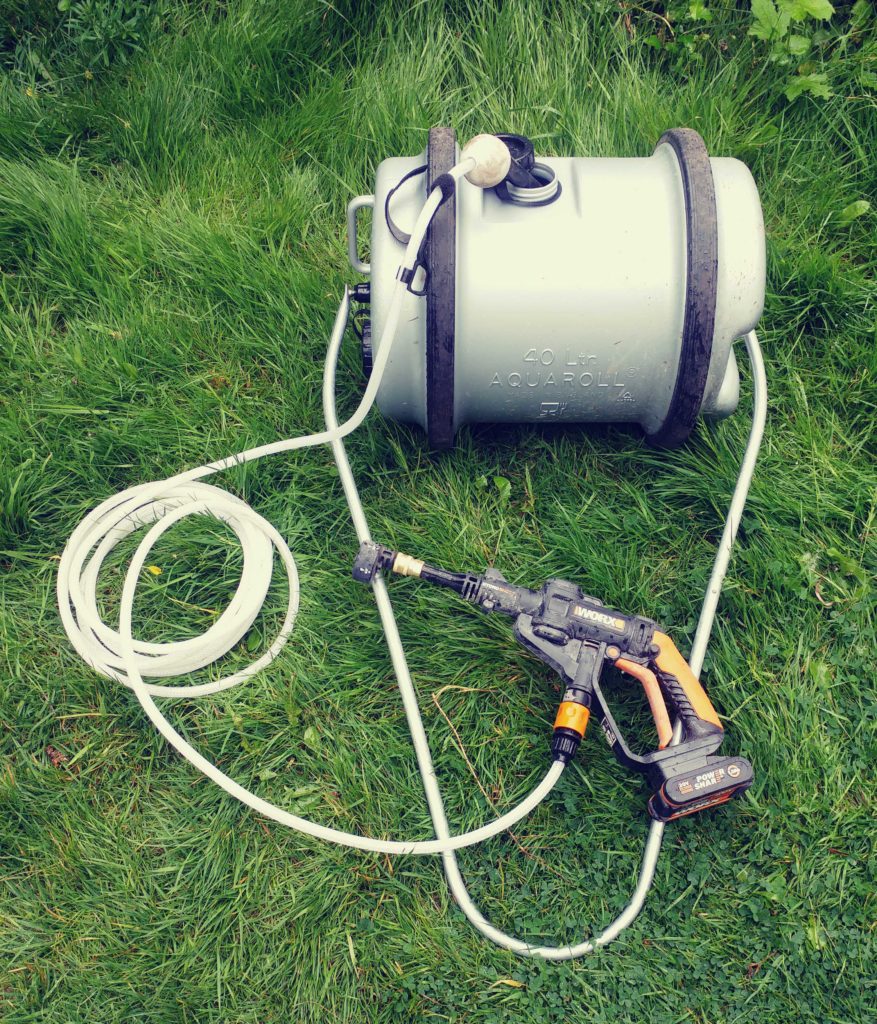 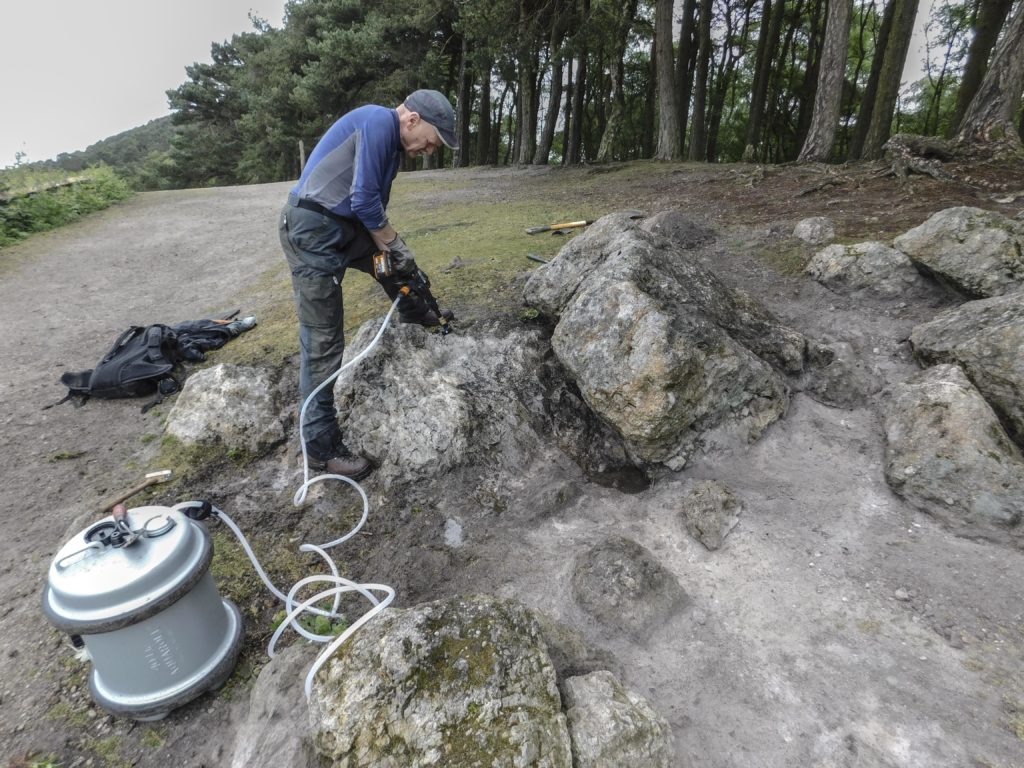 The pressure washer in action on the Bilberry Hill outcrop.