The Lower Ordovician Lickey Quartzite is well-known for its lack of fossils.  It is interpreted as a near-shore sand flat facies: as such it would have suffered bioturbation, wave agitation and twice-daily scouring by tidal currents.  These processes, combined with predation and scavenging would quickly remove any potential fossils.  It is worth remembering that, ‘absence of evidence is not evidence of absence’, and in many cases biologically active environments frequently have a very low potential for preserving fossil remains.  However, it would be mere speculation to suggest that the environment in which the sands of the Lickey Quartzite were deposited supported any kind of biota without some tangible evidence.

On a recent Geo-Champions ‘research walk’ Alan Richardson identified a single bedding plane that preserves the paired burrow openings of Diplocraterion.  While no cross-sections of the U-shaped burrows have been observed, the more or less consistent spacing of the pairs of openings supports this interpretation.

Julie Schroder and Alan Richardson returned to the site in April to clean up the exposure and provide a clear path of access. 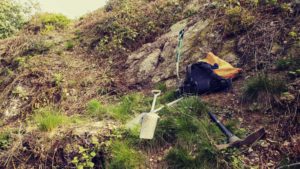 Fig 1. The site prior to the clearance work.

Fig 2. The site after completion of the clearance work. 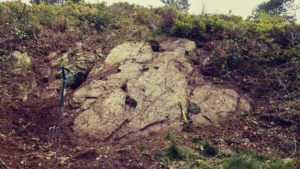 Fig 3. A general view of the fossiliferous bed. 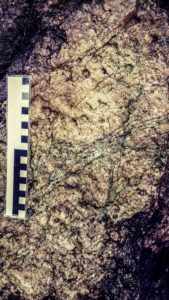 To date, these trace fossils constitute the only evidence we have of the life that inhabited the Ordovician environment of the Lickey area.  Their absence from other beds suggests that in this instance they were preserved by an unusual event, in which a sudden inundation of sediment preserved the burrows without disrupting them.